Just a little more than two weeks ago, as a mother, I experienced one of the most terrifying moments EVER! During my high school’s annual alumni picnic, a fight broke out, and then gun shots quickly followed. BANG!

Three of my four children were on the picnic grounds when this madness occurred. Two of my babies were close by, but my fourteen year son and some of his friends walked out of my sight, just two minutes prior, and that scared the bejesus out of me. After I secured the safety of my two girls (on the ground under a table!) I immediately jumped up and scanned the crowd, of way more than a thousand, desperately hoping to spot my son. There were so many panic-stricken faces, but none of them belonged to my boy. Anxiety started crippling my thoughts and I started to freak out. It took several times before I could even dial the correct number to his cell phone. When I was finally able to connect with him, my anxiety and fear started to subside. He (and all the members of his party) was safe.

They all managed to escape from being trampled, under the weight of the thick crowd, and were headed back home. Knowing that, I retrieved both of my girls and scrambled out of there, as quickly as I could.

Sad to say, I’ve experienced situations similar to this before. The only difference between those incidences and this one is that my children happened to be there, in the midst of all the chaos. As a mother, it was a total and complete nightmare. It’s something that you don’t want your children to know exists, let alone be caught in the middle of.  To be placed in a situation where you’re left (as a parent) being completely vulnerable versus being in total control (like you’re use to being) is horrific. Not knowing if my children were safe from harm, and whether or not they would make it away from there unscathed, was just too much for me. I’m so thankful that my motherly instincts kicked in and took over. Had they not, no telling what my response would have been. In fact, I know if only I had myself to rely on, things would’ve likely wound up more chaotic. There were so many children there, so I’m sure scores of other mothers, fathers, aunts, uncles and friends felt very similar to what I described.

*A 17-year-old male was shot, and several days later he died as a result of his injury.

So that was my (our) first time attending the alumni picnic, and more than likely it’ll be my (definitely, theirs…meaning my children) last time. BANG! 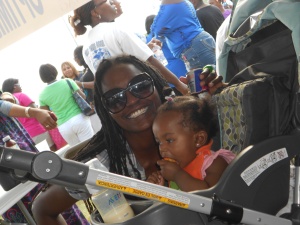