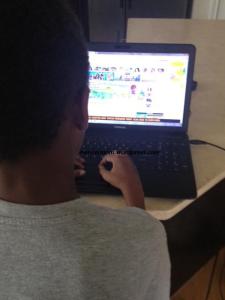 This child has not been found guilty of any pornography watching. He has yet to reach the statistical age of 11. Whew! (wipes forehead)

Before talking to my children, I first decided to talk to several of my friends to get their perspective on children/teens and porn. After speaking to them, admittedly I was rather surprised at their responses. No one was as shocked and dismayed as I was. In fact, they made me feel as if I was totally overreacting and going overboard. Basically, everyone was taking it all in stride. I heard a lot of, “Their boys. What do you expect?” “It’s natural, that’s what boys do.” “Oh, girl! That’s nothing!” I seem to be the only mother/parent/person bothered by the fact that their teenage child and their friends may enjoy looking at pornographic images of women. Am I overreacting? Am I not well within my rights to be flabbergasted?

In my opinion, teens are going beyond pushing the envelope, while adults are just so carefree. I previously read an article written by another concerned mom, in regards to her teenage son watching porn on his laptop, and the comments she received were pretty nasty. She was completely villainized by the readers. For the most part, they felt like she was out of line for looking through his laptop. They said she completely embarrassed him and violated his trust. They also said that he wasn’t engaging in anything abnormally. The comments went on for days.  Although I didn’t leave a comment, I was totally on the side of the mother. I, too, feel like some things are to be reserved for adults and your adult years. I don’t think that it’s okay or acceptable for my teenage son or daughter to seek out pornographic images on the computer, their cellular phones or any other technological device. I refuse to believe that I’m the only mother/adult who feels this way. Whatever your opinion, I’d love to hear it. What’s your perspective on the matter? Have you had to deal with it? If so, how did you handle it?

All perspectives are respected.