Yesterday I was on a conference call with about eight members from my graduating class of 1994. We were discussing our upcoming two decade class reunion. Even though it’s still two years away, we’re starting to prepare and get things in order now.

While it was exciting to engage and hear the familiar voices of my fellow ’94 Mackenzie Stags, it was then, during that call, when reality snuck up behind me and tapped me on the shoulder.

Right then and there, my entire body was consumed with goose bumps at the realization that so much time has indeed passed.

To be more exact, it has been eighteen years, one month and eighteen days since Mackenzie’s graduating class of 1994 gathered at the Chene Park Amphitheater, in downtown Detroit, right smack dab in the middle of a heat wave, to signify the successful completion of our “wonder years”. It would be the last time that all three hundred and eleven graduating seniors would ever be together under one roof. I remember the entire scenario being such a big deal to me, so much so, that I cried and sniffled nonstop, throughout the ceremony.

I sat there rationalizing the fact that, I’d gone to school with these people for the last four years, some for even longer than that. I’d formed a bond with these people. They were very much a part of my daily life, as I was theirs. We were truly a family. Now I was being forced to let go and move into my own destiny by myself, and without them?

Those are the thoughts that consumed my mind on that extremely hot and sticky graduation day.

Here comes the infamous cliché: “Seems like only yesterday” that I was actually living that moment, expressing those feeling, crying those tears and coming to those realizations.

It’s been nearly twenty years and it’s good to know that some things never change. Everything that I felt on June 15, 1994 all came back to me yesterday as I sat, listening in on that conference call.

I smiled as I listened to the grown-up versions of those same ’94 Stags as we compromised, made plans and took on responsibilities. I chuckled as jokes were made, as teeny tiny jabs and sweet natured pot shots were taken. I was so relieved that we were able to successfully pick right up where we left off, nearly two decades ago earlier. Everyone was them same, just as I remembered them.

Yes! Twenty years post-high school graduation is steadfast approaching and I’m so welcoming of it, so much has been accomplished and there’s so many worthwhile memories left to be made!

Admittedly, I was feeling old at just the mention of a twenty year high school class reunion, but just the fact that I’m still here and able to participate is also worth celebrating! 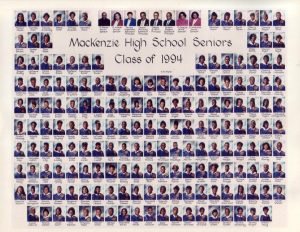 Some of David Mackenzie’s graduating class of ’94