So after being rejected for entrance into third grade for the 2011-2012 school year, I withdrew my son and decided to utilize Connections Academy curriculum to home school him.
Well, after a few weeks, I decided that Connections Academy was too structured and fast-paced for my liking. We withdrew from the program and opted to use our own curriculum, based on Texas educational standards. Our main focus were going to be  on reading, math, penmanship and the Texas State Start Test.
Monday through Friday,  the Littlest Boy and I worked diligently and hard to succeed in our quest to prove all of those teachers and administrators wrong. We were so motivated. All school year we worked extraordinarily hard.
Over the summer, we continued to study and read daily. By the time enrollment came around, for the 2012-2013 school year, we’d successfully completed all of the third grade curriculum and had even gone so far as to begin working on a fourth grade curriculum.
I proudly went back to the school and enrolled the Littlest Boy in fourth grade on a Monday. I was so eager to show him off, all of his work and what he’d accomplished. I could hardly contain my excitement as I filled out the enrollment forms.
I successfully enrolled him for fourth grade and we were scheduled to meet the fourth grade teacher on Wednesday, during “Meet the Teacher” night.
Well, Tuesday I received a phone call from the school’s principal. She called to tell me that she wanted to place my son in third grade, for the upcoming school year, instead of fourth grade.
Her words: “I know he’s age appropriate for fourth grade, but I think third grade is where he’ll be most successful. And, his being successful is my first priority.”
There is where I cut her off, explained some things to her and said that a face-to-face meeting was necessary.
We didn’t get to meet the teacher on Wednesday because they didn’t assign my son a teacher, plus my meeting wasn’t scheduled until Thursday. Do I have to say that the boy was pretty bummed?
At the meeting I was met only by the principal and the assistant principal this time. They tried to bombard me with statements such as: We want him to be successful. His success is our top priority. It’s in his best interest. We can observe him for a week and if he’s exceeding in every ares of the third grade classroom, then we’ll move him to the fourth grade class, yada yada yada!
My question was: Is this the protocol for all homeschooled students who are returning to the traditional school setting?
Their corroborated answer: Well, we’re basing our recommendation on the same recommendation that we reached last year, before you withdrew him.
Me: Well, why aren’t recommending that he goes back to second grade, since that was your last recommendation?
Them: No answer. (Literally, they had no response. Neither of them.)
Me: So it doesn’t matter that I used a State of Texas third and fourth grade curriculum to home school him?
Principal: Unless you kept grades in a grade book, then we’d consider that. Or if you have report cards.
Me: Well, what about  all of this school work that I have here, that he did! Can you test him?
Principal: He’ll have to score 90% or better in every test area, to be placed in his correct grade. It’s pretty rigorous.
Me: Sounds like it’s next to impossible for him or any child to pass.
In the end, I walked out of that school without having accomplished anything.  If ever I felt prejudged in my life, it was in this situation. From the moment I handed those administrators my son’s records from “Detroit, MI” until I walked out the front door for the absolute last time.
They didn’t even give my child a chance. They judged him (misjudged him, if I may add) no sooner than they learned that we were from Detroit. I felt bad for my son. He’d worked so hard and they would never know how awesome he is and how much he’d accomplished educationwise because they’d already had their small minds made up about him.

After speaking to several teachers in Katy ISD they concurred what I’d suspected the previous school year: Eff your feelings! Our test scores mean way more than you and your child’s feelings. Eff that you two worked hard all school year. Eff that you tested him and he tested above grade level. Eff all that! We take the Star test in November and we’re not about to chance effing up our scores, all because you decided to drag your little Detroit half-educated child down here to our magnificent school!

They weren’t interested in none of his school work that I’d bought to the meeting. They didn’t care to hear him read, witness his ability to comprehend what he’d read, they didn’t want to see him write, or care that he knew his multiplication facts, fractions, how to tell time, count money, place values or read a number line.
None of that mattered.
State and district test scores are all that matter!

Three months into the school year and I’m ecstatic with the progress that my little homeschooler is making. He was disappointed that he wasn’t going to attend school with his peers, but he’s since gotten over it. He’d rather stay home and do school than to do third grade work again.
I considered going to the PTA and the district Superintendent about this matter, but after speaking to several teachers and parents I knew my efforts would be in vain. I wouldn’t be exposing any dirty little secrets. I wouldn’t be blowing the whistle on anything that the district wasn’t already aware of.
So what would be my next course of action? How about exposing them to the very passionate and extremely opinionated world of blogging moms, dads, cousins, uncles, aunties, grandparents, etc.?
I’m eager to see their reaction to being bombarded! 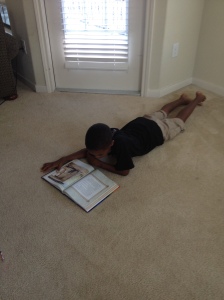